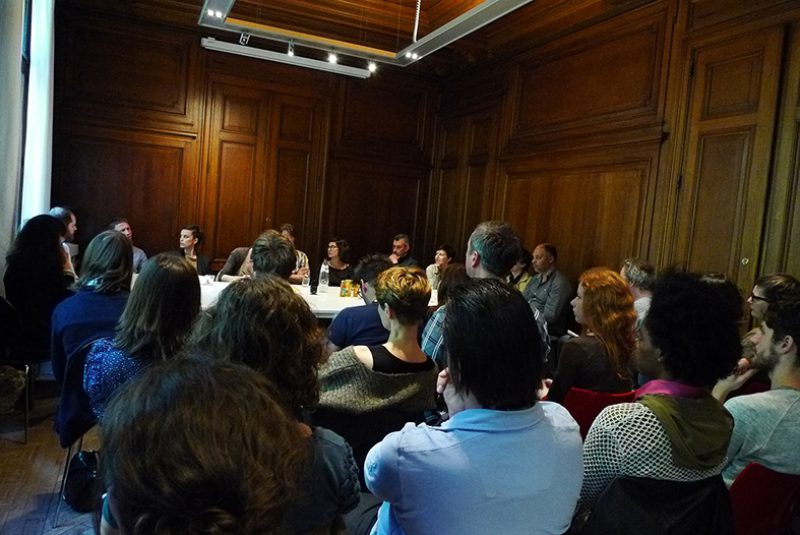 On & For Production and Distribution (On & For) stems from a previous European project called On & For Production (2014-2016) and will build upon its results. During the project's first duration, On & For created 4 public workshops, 1 symposium, and 5 round table events that invited more than 150 professionals from 15 countries. By 2016, On & For had supported 21 international artists' moving image (AMI) projects.

Listening to the feedback and demand for such a project to continue evolving,  a new project with deeper insight into matters of production and distribution called On & For Production and Distribution (2018-2021) was launched.

On & For produces public situations for the discourse on AMI production and distribution to grow, inter-sectorial knowledge exchange to thrive, and sector development to flourish.

On & For focuses on accompanying AMI projects in-the-making, their authors and producers too, and invites keen professionals from the visual art and film sectors to partake in their evolution, supporting projects in development with hands-on peer to peer Work Sessions. This component is invitation based and set up for the development of the projects in progress and to build up cross-sectoral (namely art, film, and culture) AMI networks.

On & For is initiated by the artist-run production and distribution organisation Auguste Orts (BE) in collaboration with the AMI-oriented film festival Kaunas International Film Festival (LT), the AMI-focused arts agency, collection and distributor LUX/LUX Scotland, and the artist-run higher educational institute Nordland Kunst -og Filmskole (NO).

On & For Production and Distribution is made possible with the support of the Creative Europe Programme of the European Union.