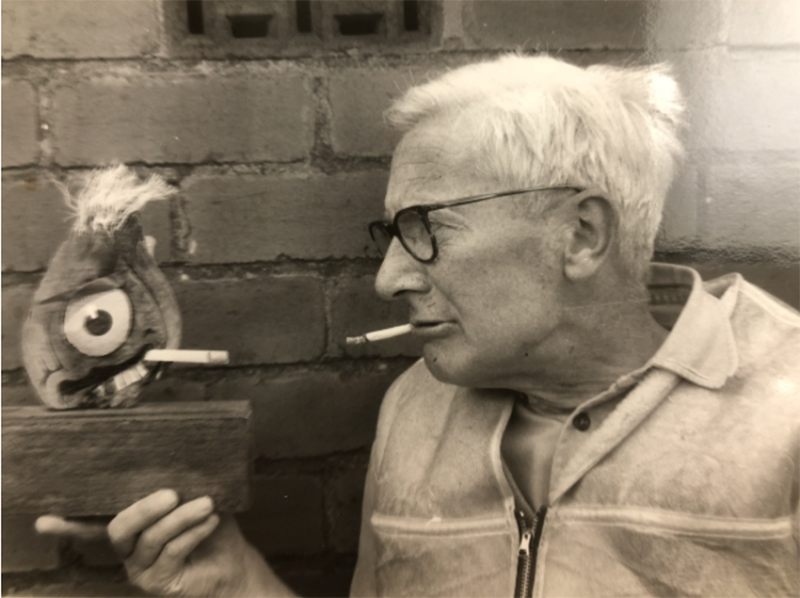 Interviewing an Animal in its Own Language by Duncan Marquiss

When the brass head speaks, there is no guarantee it will speak in a language that we can understand. The song of the machine may be inaudible to our ears, invisible to our eyes, and unthinkable to our minds.

This is a proposal for a film exploring lateral connections between Artificial Intelligence and Ethology (the science of animal behaviour). It is a film about instincts, artefacts, and studying non-human minds. The Dutch biologist Nikolaas Tinbergen (1907-1988) studied animals using artificial stimuli that mimicked natural signals. He painted herring gull beaks on sticks, courted grayling butterflies with cardboard mates, and watched oystercatchers incubate giant plaster eggs. Tinbergen saw that animals responded to his simple dummies if they sent the right cues. In his gull experiments, presenting just the red spot of the bill was enough to elicit begging behaviour from chicks. For humans too, some replicas don’t need to be realistic to affect us – think how easily a cartoon character becomes emotive with an animated gesture. What then can Tinbergen’s ‘superstimuli’ experiments tell us about our own responses to artificiality? Are we pre-disposed to identify with things that appear intelligent, and does misrecognising AI make us vulnerable to manipulation?

The historian Pamela McCorduck sees AI as another attempt to make likenesses of ourselves, like painting or sculpture. But the ethicist Joanna Bryson warns that we shouldn’t make anthropomorphic AI as this imagines an ideal human being. It also obscures the agendas of the people behind the automata, those who wield that technology. The computer scientist Iyad Rahwan describes AI as a “new class of actors”, a variety of intelligence distinct from biological minds. For him the question is not can machines mimic humans, but do we understand machines? Noting that machine learning algorithms can become inscrutable ‘black boxes’, Rahwan has called for a field of ‘Machine Behaviour Studies’ to study AI in the wild. Ethologists study species in their natural habitat (or umwelt), an approach Tinbergen described as “interviewing an animal in its own language”. Watching an animal go about its business suggests what questions to ask of it (a good approach for a documentarian too). Following Rahwan then, can we interview a machine? There is a distinction between a mind that has emerged on its own, and one created as someone’s means-to-an-end. But what is the difference between a gull’s instinctive urge to roll a rectangular wooden egg into its nest, and the program instructing a robot to rearrange toy blocks? Are instincts genetically programmed patterns, or is behaviour learned and flexible? The ethologist’s methods may help us to distinguish machines from minds, and to see that AI don’t think or behave, like humans or any other animals.

The film will be a feature-length experimental documentary, exploring Tinbergen’s ideas and observing AI engineers at work. I am also keen to develop this project for exhibition format, potentially to be presented in a shorter duration gallery version, or multi screen installation, with accompanying drawings. Currently I am at an initial research stage of the project and looking for participants for the project. I’m considering filming in AI departments at Glasgow and Edinburgh Universities, MIT in Boston, and Silicon Valley, California. Tinbergen was a filmmaker himself, and I’d like to see if any of his archival material can be accessed. I want to reinterpret his superstimuli experiments by restaging them for humans and AI, shot on 16mm film with a Bolex – the camera that Tinbergen used and one I’ve used in my own work too. I hope that recontextualising AI in relation to ethology will help to frame this much-discussed topic through an alternative lens. The film will explore ideas visually with an emphasis on the material textures of the subject matter. (For instance, Google has recently attempted to create a “less-creepy” sounding AI assistant by programming it to talk with speech disfluencies, adding “uhms” and “ahs” to its dialogue. These simulated errors give the machine a natural affective ‘texture’. Is this comparable to the speckled patterns Tinbergen painted onto scraps of metal to mimic eggshells? That analogy could be presented through a montage of eggshell surface textures accompanied by audio of machine dialogue.)

DUNCAN MARQUISS (b. Scotland 1979) is an artist based in Glasgow who works with drawing and the moving image. Recent exhibitions and screenings include Stalking The Image: Margaret Tait & Her Legacy, GoMA, Glasgow, 2019; We Would Be Lost Without You, Experimenta, BFI London Film Festival, BFI Southbank, 2018;Antiphon, LUX Scotland at Kochi-Muziris Biennale, 2017; a solo exhibition Copying Errors, Dundee Contemporary Arts, 2016. Marquiss was the 2015-16 recipient of the Margaret Tait Award.

Stage of development: pre-production and research