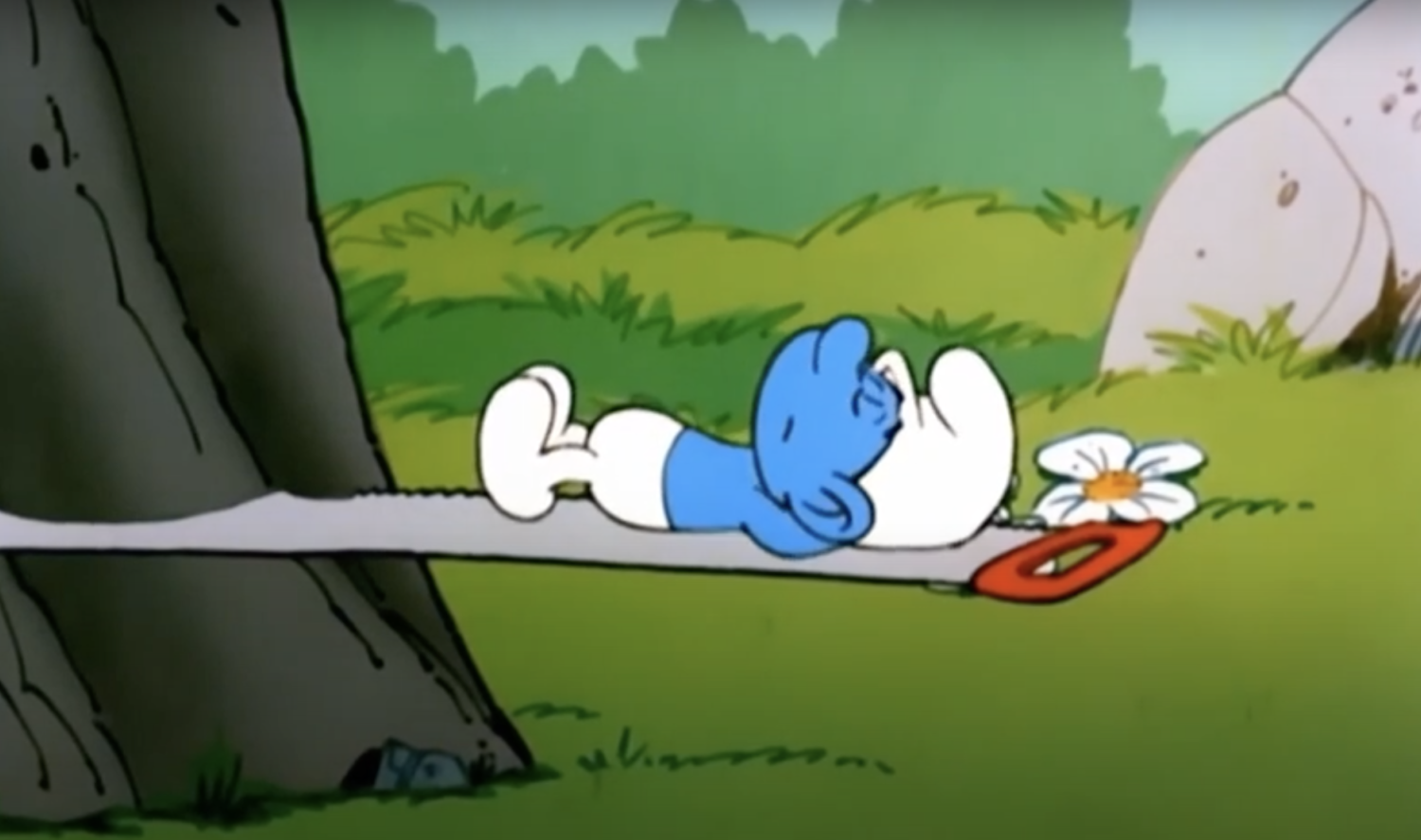 Recently a colleague asked for permission to sleep in the next day and consequently show up late for work. After carefully considering her request, I realised I couldn’t find a good reason to not accommodate her appeal. After all, we all need sleep.

To show solidarity, I decided to also sleep in the next day. And the day after, and the day after… In fact, I’m currently still sleeping in. And to be honest, I don’t feel the urge to stop doing this anytime soon.

Some of you may be familiar with the TV episode entitled Never Smurf Off 'Til Tomorrow (1984). In this favourite Smurfs episode of mine, we find the little blue creatures eagerly preparing for a hurricane. When Handy Smurf, the prolific workman/inventor of the community, heads to the village windmill to check up on Lazy Smurf, he finds him sleeping, resting on the sails of the windmill he was assigned to protect.

As Lazy is rudely awoken by Handy, he is told about the urgency of securing the windmill. Lazy, in a rebellious act that marks him as my all-time favourite Smurf, decides to go back to sleep, before Handy reawakens him with a splash of cold water. Realising the urgency of the situation, Lazy tries to get the windmill shut down, but as the storm is unleashed, he gets hit in the head and falls unconscious. The windmill goes airborne.

As the Smurf community is based on cooperation and sharing, with each Smurf contributing to society to the best of their abilities, Lazy’s antics incite outrage and blame. However, towards the end of the episode, Lazy miraculously saves the day by accident and is touted as a hero despite himself.

This basic misrepresentation of Lazy’s actions as heroic goes to the core of his emblematic power. By falling asleep, he intentionally brushes against the grain of omnipresent Smurf ethics centred on non-stop productivity. His is a knowledge absent from the all too eager Smurfs. It is a knowledge defined by sleep and virtue. The fact that the other Smurfs falsely present his actions, while he is mainly sleeping and doesn’t contribute anything particularly meaningful to the events, only reinforces his subversive quality. Only through sleep, Lazy knows, one holds the potential to overthrow the status quo.

Like Lazy Smurf, the late Croatian artist Mladen Stilinovíc was a devout sleeper. Stilinovíc famously slept as an artistic gesture. First in his studio, gracefully captured in the now iconic photo series Artist at Work (1978), later on in exhibition spaces across the globe. To say it with his own words, he was at all times in praise of laziness, merging these two related acts of inactivity.

At the time of conception, Stilinovíc lived and worked in socialist Yugoslavia. Doing nothing, the artist deliberately presented himself as a parasite in a working society. Stilinovíc’s non-action should thus be read as a refusal to participate in the fetishization of labour as a foremost propaganda tool in Tito’s Yugoslavia.

However, from a contemporary perspective, Artist at Work can just as forcefully be understood as a conceptual critique on capital's relentless demand for production and activity. It is in Stilinovíc's refusal to actively participate in events that many find inspiration to affront late capitalism and to make use of the artist's subtle yet disruptive non-act.

To be asked to contribute the opening text to a reflection on models of audiovisual production felt a bit odd at first. After all, I’ve been uncharacteristically unproductive lately, busy sleeping and napping, inspired by my colleague's initial request. Why then add yet another motivation to be productive or to be a good producer?

In his seminal book 24/7 (2013), John Crary paints a bleak “non-stop life-world” of global exchange and circulation in which individuals are calculatedly broken through sleep deprivation. This worrisome reality is only emphasized by hip worker trends, such as “sleeping on the job”: the quick nap that makes us more efficient and thereby boosts productivity even further. Sleep, in this way, gets fundamentally detached from its potential as a gesture of resistance to corporate work ethics. Instead, it becomes activated within the workplace similar to other forms of leisure, from work meetings disguised as communal coffee breaks to organised game sessions meant to unleash the flow of creative thoughts.

In an attempt to move away from this dystopian reality in which all conceivable forms of inactivity get tied into yielding tangible results, I’m wondering if it would be possible to reclaim sleep as a necessary tool to make space in our shared neoliberal sphere for something other than productivity. As such, it would be a way to undo capital's elimination of what John Crary describes as the "useless time of reflection and contemplation," with napping and resting providing a meaningful variant to non-activity.

Perhaps we can discover in Mladen Stilinovíc’s and Lazy Smurf’s deep sleep the secrets necessary to counter omnipresent productivity. Sleep thus becomes a means to be awake only when it truly matters, vehemently subverting society’s relentless demand to place everything at the service of efficiency, including states of unproductiveness.

Niels Van Tomme (he/him/his) the director of ARGOS centre for audiovisual arts in Brussels. As a curator, lecturer, and critic, he works on the intersections of contemporary culture and critical social awareness.

He would like to thank Sonja Simonyi for her invaluable editing input throughout the writing process of this text.