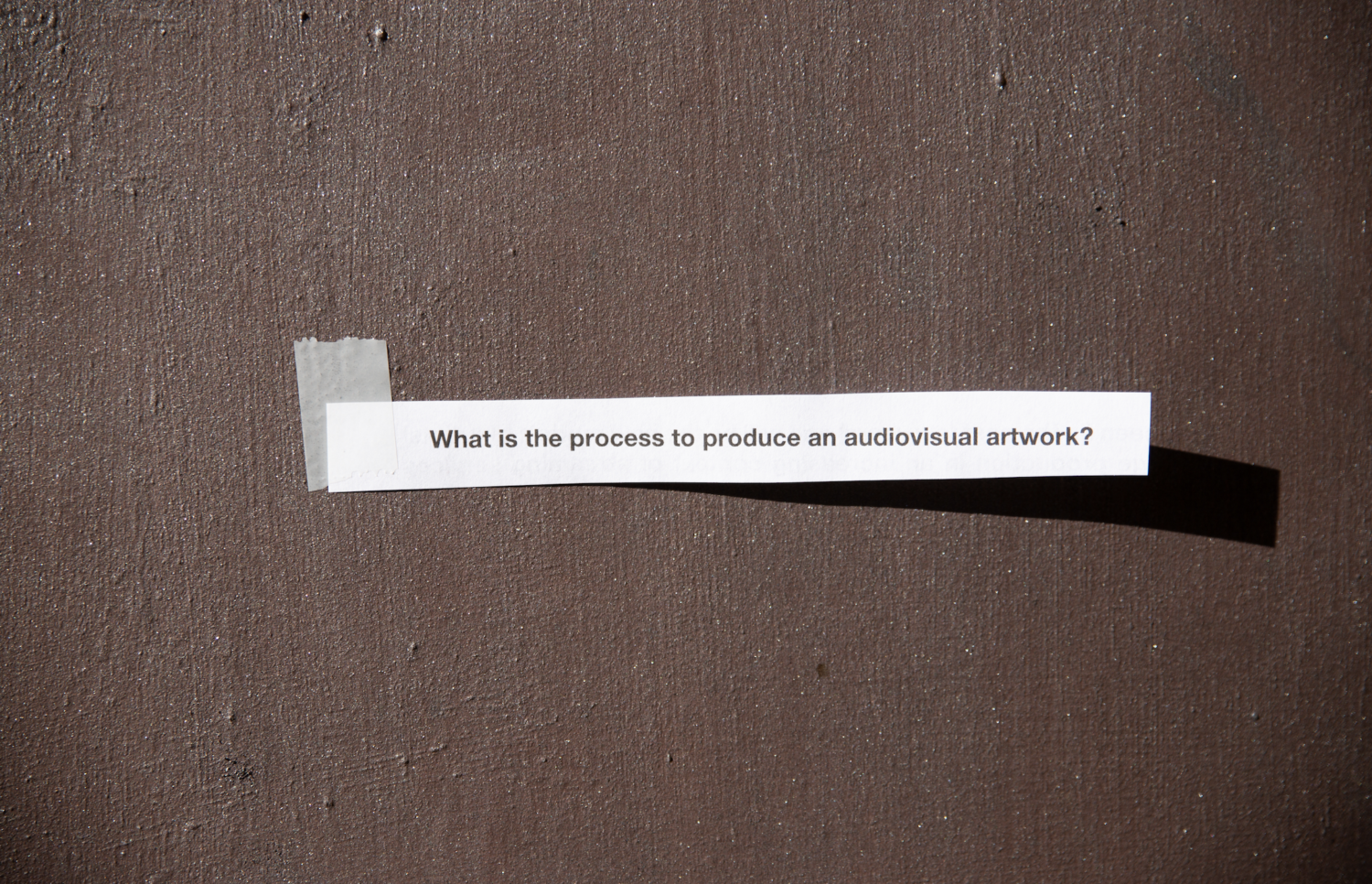 We Do Not Travel Alone: A Reflection on Film Production

'On the journey of producing films, we—artists and filmmakers—do not travel alone. To strive for fair pay for artistic labour, we need to involve ourselves in building and maintaining fair practices. And the producer, our travelling companion, extends a welcoming hand.'

1. The conundrum of self-production

I am writing this text in my living-room-turned-studio, which I share with my flatmate, a visual artist who also makes videos. I consider myself a writer and filmmaker—and a ‘dummy’ when it comes to film production. During my Master’s studies, I mostly filmed with my own camera and edited on the computers at the academy. After graduation—and exacerbated by the uncertainties thrown up by the emergence of the COVID-19 virus—my home became my ad-hoc studio. The only production with which I am familiar is self-production: a process where the maker assumes responsibility for all aspects of the work, from researching to writing, from assembling a crew to clicking the ‘export’ button after a third ‘final’ edit.

Ellen Meiresonne, the production manager at Atelier Graphoui and one of the presenters at the ​Production for Dummies workshop, captures self-production in pragmatic terms: to self-produce is to ‘provide your own logistic support on top of artistic effort and build your own platform of production and distribution.’

In self-production, ‘you have quite a lot of freedom, but also quite a lot of work beyond the artistic practice,’ says Andrea Cinel, curator at ARGOS Centre for Audiovisual Arts and another presenter. Over time, self-production can become unsustainable for the artist and filmmaker. Apart from my own experiences, I have witnessed many artist friends spending days, if not weeks, applying for funding and submitting to festivals by themselves. It is easy to talk about success when someone receives a positive decision from a funding body or a letter of acceptance from a partner institution. What we do not acknowledge—at least not enough—is the constant, invisible work and the reality that artists are undervalued and un(der)paid.

Within arts education we have glorified the image of the ‘do-it-all artist’, who is expected not only to research, make, and reflect, but also to self-organise, self-distribute and self-promote. Film schools might offer structure and encourage more teamwork. However, once a person graduates, the shelter of the institution disappears and the network, as well as access to necessary equipment, dwindles. Some of us have not worked with producers because we don’t know where to start.

It’s a paradox: the artists are dying for support without knowing what support looks like. The workshop bridges this knowledge gap. Ellen Meiresonne and Andrea Cinel, along with Alice Lemaire (a producer at Michigan Films), share their experience as producers with generosity. As we gain a more transparent and concrete picture of production and the relationship between the filmmaker and the producer, we start asking ourselves what the producers are encouraging us to think about throughout the workshop: to what extent do we want to be independent?

2. Production as support and care

In Ellen’s words, ‘producing a film is a long journey.’

When I think of the ingredients of a physical journey, I think of planning, detours, discovery. I think of times when I just had to board a night bus and spend the night sleepless, wondering why on earth I was still on it. On the journey of production, the producer is a knowledgeable travelling companion. (Myself and others accustomed to self-production? The inexperienced travellers.)

Andrea and Ellen summarise the producer’s support in four areas: artistic, logistical, financial and legal. One of the case studies produced by Atelier Graphoui, ​Un Amour Rêvé​ (Arthur Gillet, 2018), demonstrates the lengthy and diverse support a film requires. The production period of this hybrid film lasted six years. Other than offering support during its initial development, the producer helped re-orient the project when an early funding request was rejected and when filming in relevant locations was no longer possible. Such obstacles would be difficult for a filmmaker to handle without guidance.

Both Ellen and Alice emphasise the ‘relational dynamic’ between the filmmaker and the producer. ‘It is important to seek understanding with the producer, not to view them as an antagonistic "money person". Most producers of artists’ moving image are idealistic and are willing to be constructive across the stage of the project,’ says Ellen.

I find the following remarks from the workshop illuminating:

Ellen: ​2, 3, 4 years working with [one] person. It's not a commission of the ministry. It's a personal, long-term relationship.

The producer invests in a project over numerous years—I had not realised this until now. In self-production, I have not worked (or have not been able to work) at this scale.

I pause to elaborate this realisation:

The producer invests care, resources, tangible and emotional labour in a new project—and the filmmaker—over multiple years​. Under this framework, the relationship between the filmmaker and the producer is a mutual commitment.

However, other than new, high-stake projects, a producer can also support projects-in-progress based on the filmmaker’s needs. For instance, Atelier Graphoui offers ‘creative human resources and a production space’ and ‘[provides] the project leaders with equipment or audiovisual facilities.’[1]

Knowing the different kinds of available support, we can reflect on the relationship we want to have with a producer. Regardless of the answer, the conversation starts with our understanding of the producer’s work. To that end, Andrea suggests ‘[getting] to know the field, checking out who's producing what and who’s funded by Vlaams Audiovisueel Fonds/Flanders Audiovisual Fund (VAF) [and other funding bodies].’[2]  Ellen underlines the importance of sending out emails in a personal way, showing awareness of the potential match between the filmmaker and the producer.[3]

[2] Funding has implications on the types of projects the producers are capable of supporting. A list of different funding bodies in Belgium can be found on On & For’s webpage, which also hosts the video of the workshop, https://onandfor.eu/documentation/video-production-for-dummies-brussels-2020. [3] Open calls provide structured, equal access to a producer. Atelier Graphoui posts an annual open call for production focusing on novice filmmakers. ARGOS started an open call initiative in 2020 and has produced works proposed by artists who are new to single-channel films.

3. Production as education and dialogue

Through the production process, the project takes on a life of its own. Rather than the solitary author, the filmmaker becomes a contributor. The shift from self-production to working with a producer requires the filmmaker to stay flexible and, if not already, learn to work through changes.

These choices can take form in ‘shooting media, camera, sound, data management and software.’ Some choices—such as shooting media and sound—are both logistical and aesthetic decisions. When discussing how much impact the producer has on the aesthetics of a project, ‘dialogue’ is a keyword. ‘The producer is not your enemy,’ says Alice, ‘the producer provides options and we make artistic choices together.’

While allowing for more options, new resources can mean new constraints and negotiations. Most funding comes with conditions; examples include hiring a local crew or spending a percentage of money in a certain region. In the case study of ​OJO GUAREÑA​ (Edurne Rubio, 2018), produced by ARGOS, one of the partners requested a scene filmed with snow, which meant waiting for the right weather conditions and subsequent accommodations in the filming and reporting timeline.

The producer helps keep track of the progress of the project and, necessarily, safeguards its intention. Ellen highlights the importance of a ‘fundamental dossier’ which documents the filmmaker’s intention in the beginning of the production process. The filmmaker and the producer can thus refer back to this document when developing materials for different potential partners.

In the production process, the filmmaker also learns to navigate through the ensuring distribution of the film, to give value to that time and labour, aspects that are often murky in self-production. ‘It’s not a matter of finding a large public, but a good public, for your film,’ says Ellen.[4] ARGOS, as a distribution platform and an archive, also maintains its relationships with filmmakers.

[4] On & For has organised a separate session on distribution in 2019, including the workshop ​Distribution for Dummies alongside the ​Distribution Models programme. See https://onandfor.eu/programme/distribution-models-brussels-2019.

As for valorisation, Ellen says, ‘I try to valorise time. If a project comes to us at the post-production stage, I will valorise what the maker did before. I like to give value to things.’ In ​Un Amour ​Rêvé​, for example, the filmmaker was compensated for the archive materials and research conducted prior to the production.

4. Towards a more sustainable practice

In fact, we can all probably do to give a little more value to things. Exploitation in the arts comes from a lack of transparency and a (perceived) power hierarchy. Self-production based on working for free, or very little, leads to more exploitation in the system.[5]

[5] Those who can afford to work this way are in a privileged position. Artists who cannot afford to work for free do not have as much time for getting visibility and external support due to other commitments. This is a form of inequality to which many of us unknowingly contribute.

Alice advises filmmakers ‘to have different projects moving on different scales.’ While one project would require a producer, other smaller projects can act as showcases. Working with a producer enables us to produce on a larger scale—it educates us about how the system works and, more importantly, updates our agency to participate in it critically.

On the journey of producing films, we—artists and filmmakers—do not travel alone. To strive for fair pay for artistic labour, we need to involve ourselves in building and maintaining fair practices. And the producer, our travelling companion, extends a welcoming hand.

Jue Yang is a writer and filmmaker currently based in Rotterdam. She is a contributor to the art magazine Metropolis M.