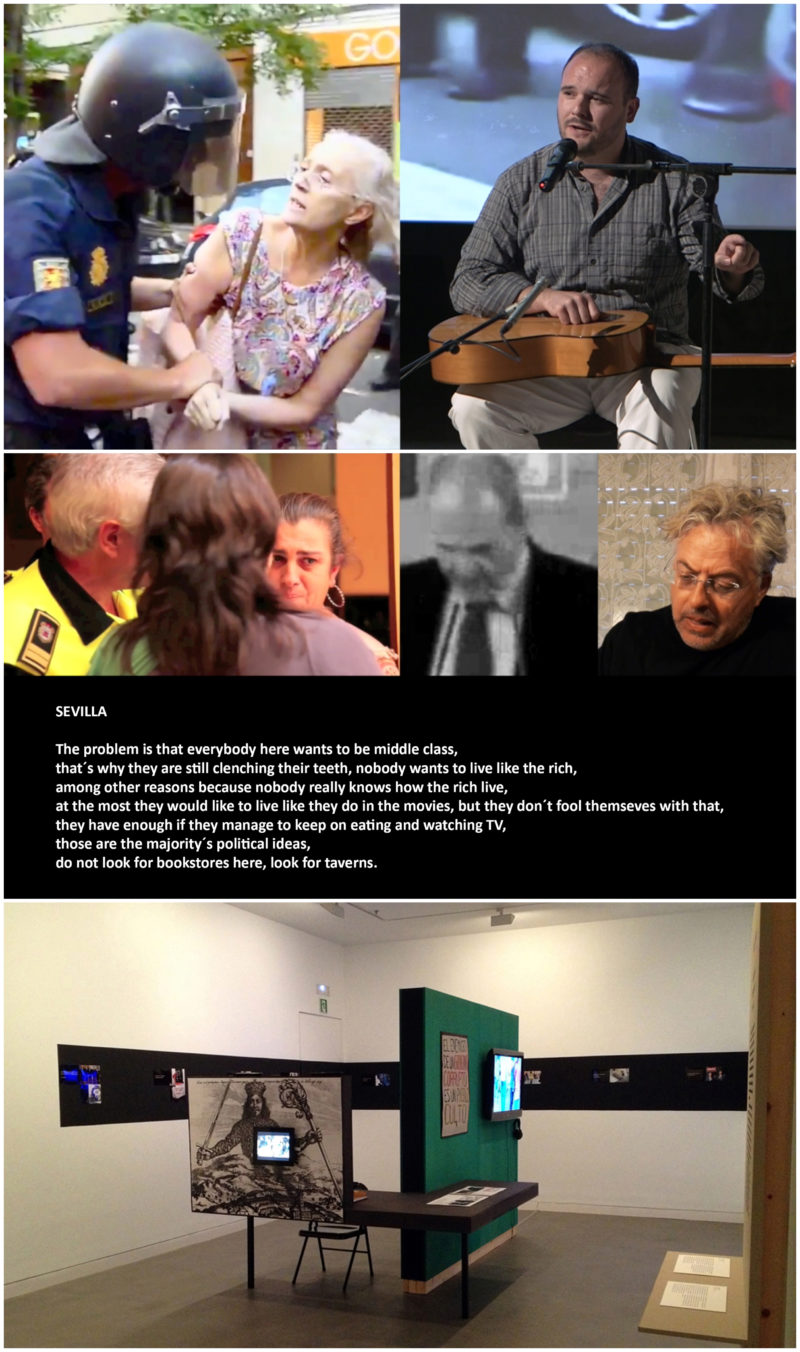 By marching we say NO © Isaías Griñolo

By Marching we say NO by Isaías Griñolo

By Marching we say NO (Caminando decimos NO) is a timeline of the contemporary history of Spain during the Mariano Rajoy era (current Spanish Prime Minister), edited with traces of personal lives and critical judgments regarding punishable things that range from the Reform of Article 135 in the Constitution (an instrument of subjugation to the Troika), to the Ley de Seguridad Ciudadana [Public Safety Act, also know as the “Clamp Law”] after the 15M protests.

What is going on in the South of Europe? How can it be told? Who will be translating all that?
This is a research on the footsteps of the population’s protest and disgust in seeing financial groups hijack democracy and throw their lives away. It is made of hybrids stories, from poetry, flamenco and visual arts that are constructed with online materials (and that will later be expanded by their protagonists) to foreground this new social scenario as being constructed with and on the lives of people. In his Cancionero apócrifo [Apocryphal Songbook], Antonio Machado defined the “máquina de trovar” [ballad machine] as a device whose medium is the community. This project is a mechanism to tell and sing the streets.

ISAÍAS GRIÑOLO (1963 in Bonares, Huelva, Spain) is a visual artist working on long-term projects fueled by the relationship between memory, ecology, economy, poetry and art. Among them, there is Desmemoria [Unmemory] on architecture vs. memory that was shown at La Capella (Barcelona) and Matucana_100; (Santiago de Chile); Escombros: imágenes, relatos y discursos de las prácticas ecologistas en Andalucía (2002-15) [Debris images, stories and discourses on ecological practices] about financial flux and territories, which was part of Principio Potosí at Museo Nacional Centro de Arte Reina Sofía (Madrid), HKW (Berlin) and Museo La Paz (Bolivia); of Campo Adentro [Inland] on the construction of an oil refinery in Badajoz (Spain); aquí, donde van esas torres, mi padre plantaba patatas [My Father Used to Plant Potatoes there where those Towers Stand] shown at Fundación Cristina Enea (San Sebastian); at Sobre capital y territorio [On Capital and Territory] and in the framework of the Leviatán laboratory (UNIA arteypensamiento, Seville). Since 2012 he is developing historia_contemporánea [contemporary_history] a notarial deed on the Rajoy era with poets and flamenco artist. This body of work has been shown in Contra Tàpies (Fundació Antoni Tàpies, Barcelona); in 18 Photographs and 18 Stories with Isidoro Valcárcel Medina (If I Can’t Dance, Ámsterdam); in Cuartos de Utopía included in Flares in the Darkroom at Secession in Vienna, and at The Night of the Blackout co-curated with Paul Beatriz Preciado (MACBA, Barcelona).

Info: By Marching we say NO (Caminando decimos NO) the project was shown May 2016 at Hors Pistes.