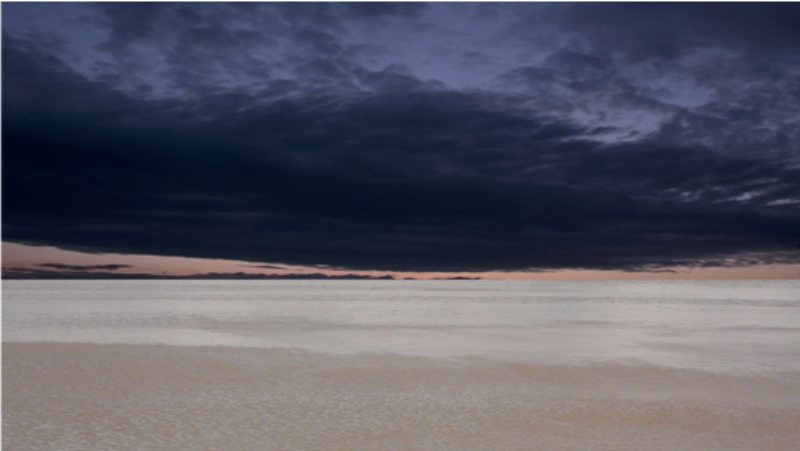 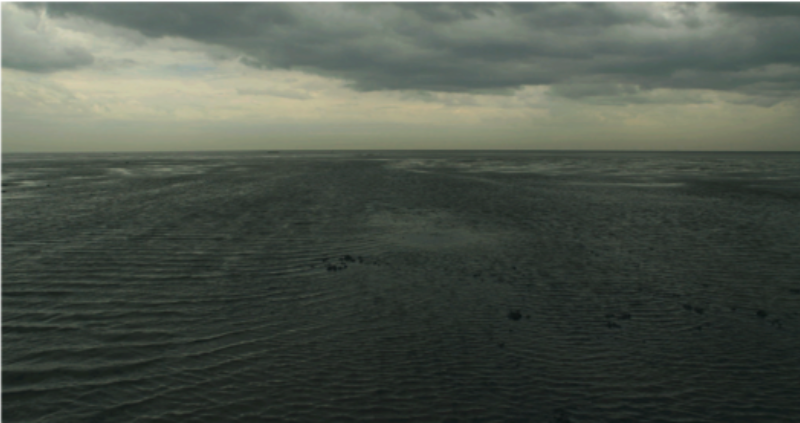 This triptych of films utilises different histories while focusing upon signature locations within the River Thames and beyond: from Millbank Prison (now the site of Tate Britain) to Second World War architecture on the Essex coast line to an Indian sword looted during the early days of British colonial expansion. Linking places as far flung as the Canadian Northwest Passage and the Cellular Prison in the Andaman Islands, the three Missives create an extended narrative.

“The audio capture blinks red, telling me I have filled another chip. The slow roll of the waves rocks even a ship of this size; the swells create a creaking backbeat to the recording. No one but me will ever hear this mixture of personal and ethnographic testimonies from times long past, but I am pleased with the way the frequencies fill the stereo field. The journey has been long, and we have just entered the estuary, the engines are idle; this is the moment when the magnetic pull of the moon acquiesces to Earth’s rotation, and the river resists before continuing into the next cycle.”

Extract from the log of the Leviathan class freighter ‘Reserve' (undated).

Each ‘Missive’ responds to a different history, but key to this development is the protean nature of the River Thames, which links the works.

The three films grew consecutively out of each other; the genesis for a triptych of films became formulated during the making of Panopticon Letters: Missive I(2012), while researching various other ‘river stories’.

Meta Incognita: Missive IIwas shown at The Talwar Gallery, New York earlier this year and will have its European premiere in April 2019 at Courtisane festival in Ghent (Belgium) where Alia Syed will be the 2019 Artist In Focus.

Kālā Pānī: Missive III is in a development stage. It will exist in two forms; firstly as a distinct gallery piece to be installed alongside Missives I and II, and as a long-form film that combines elements from the first two films with new material within the extended narrative of The Ship’s Captain.

Each location in the three films is shaped through different historical formations, but all are shaped through effects of power and colonialism, their specificity informing both the conceptual and aesthetic framework of each distinct film.

Panopticon Letters is a single screen work that explores ideas of memory and techniques of the body and colonialism within the tradition of landscape painting. In the film, footage of the river Thames in London is altered to bring about a false relationship between sky and water. This is set against the technical descriptions of the architectural plans for an ideal prison as read from The Panopticon Letters' of Jeremy Bentham (1748‐1832), who had first identified the Millbank site (now TATE Britain) for the construction of his Panopticon. The darkness of the severed horizon line allows different modes of address to emerge within a correspondence of letters, reformulating a multitude of narratives of time and place.

Meta Incognita: Missive II is based on the exploits of the Elizabethan privateer turned explorer Martin Frobisher, who repeatedly sailed to the Canadian Arctic in search of the Northwest Passage. Set in a future where global warming has opened up the Northwest Passage to trans-continental cargo trade, the narrative follows a renegade ship’s captain who has undertaken a commission to smuggle the last remnants of a now illegal commodity to England. The imagery of the film consists of two shots, sunset and sunrise. The natural rhythms of the location serve as a nexus for observations in sound and writing, bringing together the traces of wind, water, and light.

Filmed on the edges of a military testing ground, where development has been limited Syed cultivates this dichotomy in her film to form the basis of a dystopian future in which the only remaining open spaces that we will have will be those controlled by private military companies

Continuing the exploits of ‘The Ship’s Captain’ the final work of the triptych is the most ambitious. Returning to the themes of Missive I and Bentham’s ideas for his Panopticon, this will be filmed at the Cellular Prison (Kālā Pānī), built by the British in the Colonial era in the Andaman Islands and used to exile and isolate campaigners for Indian independence.

I intend to utilise a journal written by an inmate of the Cellular Prison that explores the experience of incarceration on the islands to inform the narrative.

A large portion of the narration for Meta Incognitagrew out of an intense engagement with Foulness Island, a military testing ground with a unique ecosystem, and the language and phrases recorded during interviews carried out with local inhabitants.

From these encounters, the character of ‘The Ship’s Captain’ developed far beyond the original remit of the film. Her knowledge of the ecology and history of Foulness, and the circumstances which led to her act of Piracy, became compelling narratives in themselves. It is this back-story that will lay the basis for the third and final work.

Various other elements of the story will also be explored, including the form of the cargo and the nature of the Captain’s previous research.

In Missive III, I want to pick up the story before the Ship’s Captain’ finds her ship, foregrounding the large military – industrial complex that is a future formation of the East India Company. I will make apparent, through the imagery of the Cellular Prison, how Jeremy Bentham’s ideas of panopticism shaped British colonial rule in India. Linking the three locations through the story of The Ship’s Captain underscores different modalities of colonialism, through sonic (voice of the military in Meta Incognita) formations, image construction (sutured horizon line in Missive I) and in Missive III through vistas of sea and sky seen through the architecture of the cellular prison.

My initial idea for the nature of the cargo is based on the depletion of the earth’s natural resources but, I also want to imbue the cargo with an aura of preciousness. My research has uncovered links with Obsidian tools used by the people of the Qikiqtaaluk Region of North West Canada. Making the illicit cargo Obsidian allows links to be made with John Dee (via his use of Scrying Glasses fashioned from Obsidian) who partly sponsored Frobisher’s expedition. Dee also coined the term ‘Britannica’ and first envisioned Elizabeth I at the head of an empire.

“However, it was my experiments in reintroducing certain audio frequencies from my personal archive that brought me to the attention of The Institute. The results were more than favourable, and, in my naivety, I believed that The Institute would see my research as a way to re-invigorate our moribund culture.”

In her previous life the Captain was an anthropologist/archivist collecting audio testimonies in many languages and dialects, prioritising colloquialisms and turns of speech distinct from the official parlance of the time. Occupying the spaces between the rhythm and tone of official language, they held notes and cadences no longer audible in the mono-lingual, mono-cultural future.

Through her experiments in reintroducing these sounds, she documents a change in bearing and animation of her subjects. It is this return of vivacity that the authorities wish to supress.

The inhabitants of Foulness Island must pass intense security vetting and are subject to the Official Secrets Act. The Captain grew up on Foulness Island, and like many inhabitants, has an intimate knowledge of the land.

“The ministry first acquired the island due to its unique geography; the hard flat expanses were ideal for testing and retrieving experimental ordnance…

If you let your eye trace the edge of the grass back to the shore, occasionally a line will emerge; lengths of mud flat laid with fencing – safe paths built up first with wattle then with stones, ways that traversed from one area to the next. Our headways connected us to the outside world, and the trade routes of the sea.

All that has gone now. Changing tides and weather patterns had wiped out the few remaining habitats that supported the Eel Grass, the populations of Brent Geese and Widgeon plummeted, and finally I had my opportunity. The company needed a way to counter adverse publicity, and conservation was the way they chose to do it. They could not allow an outsider to come to the island, but I was already here, with my knowledge of the wild ways, the wind and the tide. So they paid for me to be trained in what knowledge they thought I would need, ecology, navigation, and acoustic capture. My own research took me down other paths I was careful to conceal from my taskmasters.

But my research did not produce the results that were required, and I fell from favour. My breach was reported, and I was stripped of my clearance, my employment, my home, and transported to The Andaman Islands, and incarcerated in one of the company’s many secret detention centers. To cover my absence it was reported that I was undertaking research in the area.

“Alia Syed made her early 16mm films at the London Film-makers Co-operative in the mid-1980s, using the Co-op’s optical printer as a means to explore issues of identity and representation. Her work proposes an ongoing investigation of the nature and role of language in intercultural communication, with a focus on borders and boundaries, translation and the trans-cultured self. Her films draw from personal and historical realities in order to address the subjective relationship to gender, location, diaspora and colonialism.” (Courtisane Festival, 2019)