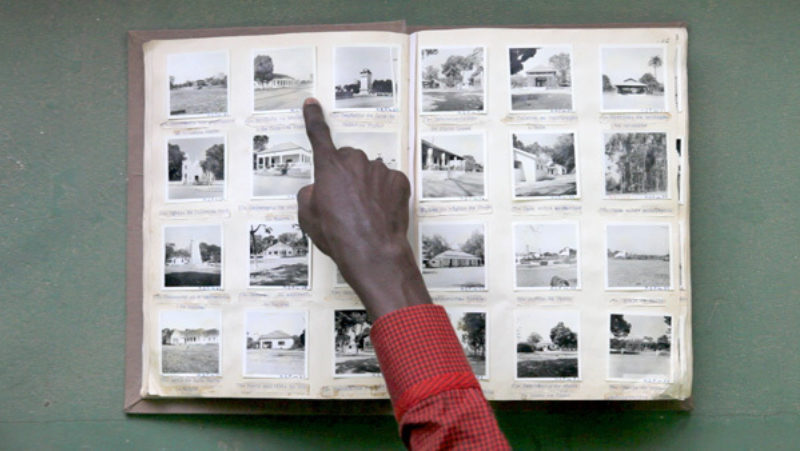 The Trouble with Palms © Filipa César

The Trouble with Palms by Filipa César

No annual rings form inside a palm tree trunk.
Palms don’t count time in years.
As if resisting historicism.
No log in of the tree log.
No timer on the timber.
Palms forget to record and remember to forget.

The Trouble with Palms departs from the ruins of the German palm oil and arsenal factory that operated on the West African island Bubaque, between the 30’s and the 80’s – equipped with KRUPP and other German machinery. Materialistically Filipa César will unfold and complicate an audiovisual critique of Western palm/tropical epistemic imaginaries upon this German/African case.

A photograph of the KRUPP works or GEC yields almost nothing about these institutions. […] Therefore something has actually to be constructed, something artificial, something set up.
Bertolt Brecht “Ein soziologisches Experiment”, 1933

[A television documentary film] talking about the apprentices at a KRUPP factory. You see them working on machines. But what they are actually working on, you cannot see; words only term ‘work’.
Harun Farocki “The Trouble with Images”, 1973

Today, the ruins of this factory constitute the substructure serving as the precarious foundation of the all village of Bubaque in Guinea Bissau. This Afro-German KRUPP archaeology, the Western aesthetic and economic applications of the palm tree, as well as various useful readings of the word palm, will be the lines through which the filmmaker will speculate on this film essay. The less known and displaced German history will unfold the politics and poetics of its latent and violent cognitive imagery that also inform today’s prostheses of colonial narratives. Palm oil – one of the most aggressive and profitable businesses in todays globalized world – with plantations which are only possible in countries near the equator and on land often gained by the deforestation of rainforests or expropriation of farms – is latent in one third of any product sold in Western supermarkets. Palmitic acid is widely used in the arsenal industry of yesterday and today. On the other hand palm trees still feed today’s Western imagery of the tropical, the exotic and the distant. As an example: two palm tree sculptures serving as public art pieces as ornaments at the new Bundesnachichtendienst BND building in Berlin – interestingly articulated with the apparently naive jury’s comment that clearly express the prolongation (with other means) of colonial fantasies of otherness, decorating the park of the headquarters of the most powerful federal intelligences services in Europe: “The palm trees give the building a strange rootless- ness, a somewhere in the no man’s land between the desert and the shopping mall, moments of displacement and dislocation.”

The film The Trouble with Palms will assemble the material of these researches – where the palm tree with its conflicts of anodyne KRUPP images, are convoked through the palm of the hand, with its gestures and casted shadows, as agent of the palming activities – to palm, to steal, to hide, to subvert. The essayistic palm will perform an active role in “how to turn it around” (Farocki 1970) through a “constructed”, “artificial” “set up” (Brecht 1933). The tropical island will rather be depicted through the troubling focus that the ruins of a German factory are the constitutional groundwork of its urban landscape. Abstractions become material and from materials new abstractions will be produced. Found footage, local encounters, statements, quotations and images to be shot in Bubaque will be entangled with the performances of various productions of palmitic shapes, gestures, shadows and shades.

Palm, flat of the hand,
Farocki would say das Hand-Innen.
The inside of the hand. And inside the hand the palmitic acid.
Palm, tropical tree, the name derives
from the shape of its leaves
like stretched fingers of the hand.