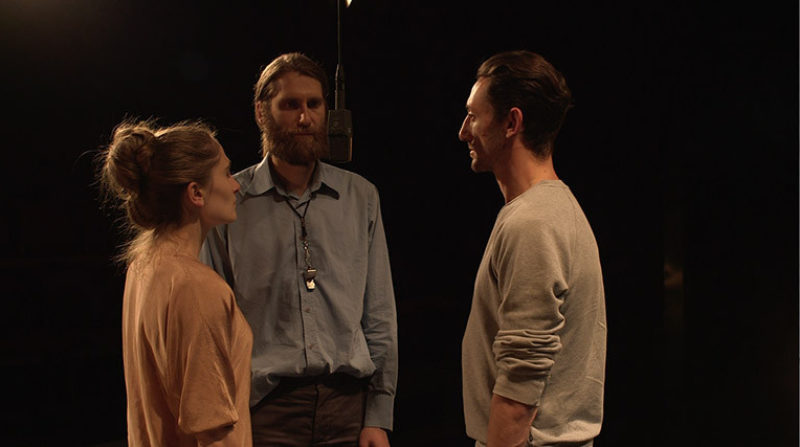 Yar bana bir eğlence. Seven Notes on Parrhesia is the second part of a project whose first part, titled Oh (for some amusement!), took the form of an installation.

Oh, for some amusement! is a multi-media installation that unfolds in space and time, operating as an experimental platform where major and minor “national” narratives (within the context of contemporary nation states of the previous Ottoman Empire) come together, unfold and cross over through cinematic, theatrical and reading formats. By looking back at the moment of transition from the domination of the voice of one speaking for many in non-presentational, eastern participatory forms of spectacle (Karagoz & Ortaoyunu) to the domination of the image in representational, mass-media spectacle (first silent movies and first national cinemas — Turkish, Greek, Egyptian, etc—), the work examines how conditions of spectatorship affect questions of citizenship and social bonding today.

The single-screen movie Yar bana bir eğlence. Seven notes on parrhesia. highlights how ‘parrhesia’ (the courage to speak out in public ) form the basic principle of both the Karagoz shadow theater as the Gezi Park demonstrations. The film questions how far the current (social) political protest in the states still need a theatrical form and in how far creativity and humor are an indispensable carrier in the development of the public discourse in which the ‘people’ speaks back. Yar bana bir eğlence. Seven notes on parrhesia. interweaves seven individual episodes/notes, each with its cinematographic and aesthetic approach. The raw material as it is available now, consists of genres such as documentary , theater – performance, interviews, reconstructions, found footage and historical images

ELENI KAMMA (Athens, 1973) lives and works in Brussels and Maastricht. In her books, drawings, videos and installations, Kamma investigates possibilities for a future architecture that rejects binary oppositional systems of thought and accepts, rather than tolerates, “other” positions. Her most recent body of work calls into question the formation, distribution and division of knowledge and experience. Kamma’s interest lies in narrative representations of transformation and her practice is informed by the inherent gaps and contradictions within existing cultural narratives and structures. These gaps or contradictions concern issues of memory, authenticity and identity.